December 11th… a day that we all hope

will go down in history as the start of a new generation of hobbyist game developers. Today XNA Game Studio Express launches. It’s not

So where do you start? XNA Game Studio Express is going to interest people who have no game development experience at

all so starting with some simple games is a good idea. You may have seen the 3 games I did for MSDN for their Upgrade Your Game promotion – Tiny Tennis, Space Blitz and Crusader. For this series of articles I will walk you through simple XNA applications using as much code

from these starter kits as possible. The original tutorials and screencasts will walk you through the game logic and these articles will add in the XNA

Firstly a couple of points: 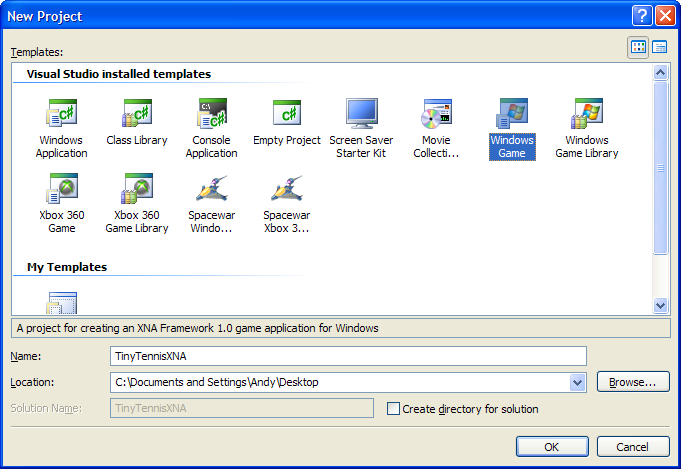 they have all the source code, graphics and sound and Microsoft absolutely want you to use this to make your own games as well as learn about

For this tutorial start with the Windows Game project. Once you have selected it you can immediately run the project and see a wonderful cornflower blue, blank screen. (It is widely speculated that cornflower blue is Tom Miller’s favorite color).

Now we need to add the project files from the Tiny Tennis sample.

Select Add Files by right clicking the project and then browse to the Tiny Tennis solution and add the following files: 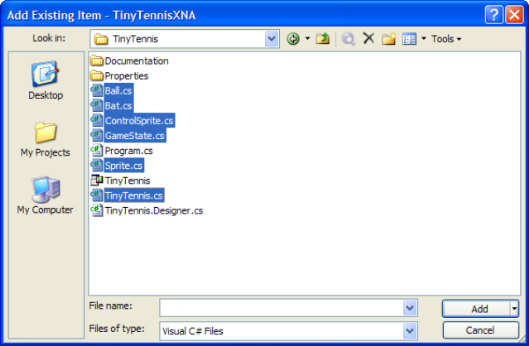 are going to be a LOT of errors right now because Tiny Tennis relies heavily on Windows.Forms and System.Drawing neither of which are available when

writing an XNA application that you eventually want to run on the Xbox 360 because the Xbox 360 does not support those libraries. So initially there are

Game1.cs is the main XNA game file. It contains the initializer for the game as well as several methods

that are called automatically for the game. If you have been through the tutorials for the Express games you will see that the games are designed to be

continually updated. As fast as possible the keyboard is read, the positions are updated and the screen is redrawn. This is exactly the same method used

in XNA so it is very simple for us to use the same logic.

You need to copy sections of code from the tennis.cs file into the

constructor which goes into the end of the Game1 constructor.

controls and the gameplay area limits

//use this line for a computer player

continually called by the XNA Game class and this is where you should draw your graphics.

Notice that I have not copied across any of the timer/stopwatch code. XNA provides its own timer logic so that is not needed. Since XNA

Now to fix up the errors. If you hit compile and walk through them one by one you will fix them in the

So you should now have a project that compiles. However when it runs you

copy the file to the output directory. Now the project should compile and run but nothing will appear on the screen. This is to be expected since the

previous version used windows forms to do the rendering.

The simplest way to draw anything in XNA is using the SpriteBatch class. This uses your graphics card to draw 2d rectangular areas on the

screen. Since Tiny Tennis uses rectangles this is perfect. The SpriteBatch allows

which is all white will work perfectly. I created a small graphic file using Windows Paint and added it to the project.

at the file properties after you add the bitmap you will see another addition that XNA Game Studio Express adds. Image files are now a recognized

project item. This is what you may have heard of as the content pipeline. It allows game content to be created and checked at compile time and the

content to be treated as part of the game rather than some external files. 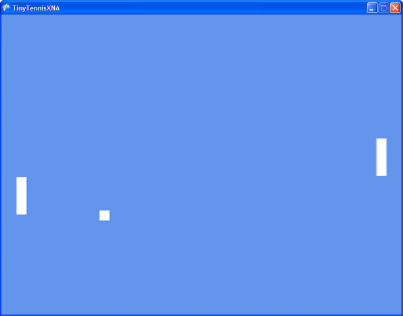 window. Make a note of the Asset name – this is how you will be able to refer to it in code. It defaults to the name of the file without the type

Rendering involves 2 steps – loading the graphic and then using it to draw.

is done in the Game1.cs class. Using the already declared reference to the content pipeline it requires a simple declaration:

and a single line of code in the LoadGraphicsContent

SpriteBatch and make it static so that the bats and balls can share it.

And create it in the initialize function.

required size and color in sprite.cs

Now if you run the game you will see the bats and balls on the screen. The final

thing is to add the new keyboard code. Since there is no events in XNA you need to simply check each time around the game loop if the key is up or down,

Just like everything else in XNA this is a few simple lines of code. Replace the humanMove() function in bat.cs with the following:

KeyboardState keyState = Keyboard.GetState
();
double velocity = 0.0;
//Set the velocity of the

sprite based on which keys are pressed
if (keyState.IsKeyDown(_upKey))
{ velocity += -_speed; }

Now you can play the game. The keys Q and A control the bat on the left

and the bat on the right uses some rudimentary AI.

Running on the Xbox

mentioned earlier running on the Xbox is something I will cover in the next article. But I’m sure you want to try so here are some pointers:

at the SpaceWar sample for examples of ow to do both of these things – or just wait till next week.